Lex-ICON :
treating text as image and image as text 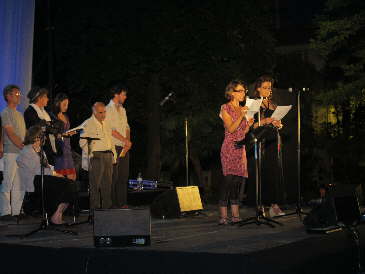 Duning the last week of July I was in Sete, in Northern France, where the poetry festival "voix vives de mediterannee en mediterranee" was taking place. What an experience! This was not the first time I had attended meetings of European poets, translation workshops, symposiums. But what Sete  - home of Valery and Brasens, - had to offer was something very sweet indeed. It was a celebration. A small celebration of poetry. The center of this small coastal city ("Salt Cemetery") blocked to vehicles, was overwhelmed with poets from all the Mediterranean countries, who read their poems - with the support of a French version of their poems, alone or with others using several languages and even sign language, with or without musical accompaniment, on the streets or in cafes, in parks or on boats moored at the old quayside, outside a caravan, under a tent or on a boat that crossed the channel city, in the morning along with coffee and croissants, in the afternoon, almost at the same time as a siesta at noon and perhaps in the rain, late at night perhaps with a glass in hand. And everywhere, everywhere there was an audience for them, a respectful audience, sometimes standing under an umbrella for hours. There were verses of the Poets suspended from one balcony to the next in the neighborhoods and in the afternoon or evening, in the common dining queues, there were poets, translators, actors, musicians, organizers, plate in hand, making contact or in selected loneliness. A really fascinating experience. The organisers in charge had really outdone themselves, had achieved the cordial co-operation of a considerable number of locals, so you felt about you the aura of warm hospitality. Among the foreign fellows there I met George Veltsos and Cypriot Vaki Loizides and I had the good fortune of reading Odysseus Elytis in a special tribute to the great Greek poet in front of a numerous French-speaking audience who seemed well informed not only about him but also our other "international" poets such as Seferis, and of course Ritsos and Cavafy. Beautiful things ... certainly it is not up to festivals  to open new avenues for poetry, but one such festival, which proclaims in a noble and joyous way that poetry is enjoyment, it is a community, is certainly very useful.

Established in 1996 and funded by the Criticos-Foteinelli Foundation, the Prize will be awarded to the author of an original work in English published in 2011 and inspired by Greece or Hellenic culture: ancient, Hellenistic, Byzantine or modern.

Areas of interest are not restricted but, since the work must be accessible to a broad readership, shortlists revolve around archaeology, art, history, and literature.

The 2010 Criticos Prize was awarded to Zachary Mason for his novel, The Lost Books of the Odyssey (Jonathan Cape). It is accompanied by a citation in honour of Nikos Fokas for his lifetime achievement in poetry and literature conferred on the occasion of the publication of The Known: Collected Poems (1981-2000), trans. Don Schofield (Ypsilon Press).

Although the Prize is always directed towards rewarding works of excellence, the sponsors would particularly like to encourage the submission of original works of literature (fiction, poetry, travel).

All works are judged by a panel of experts selected by the Society. The winner of the 2011 Prize will be announced in June 2012.

Individual applicants or their publishers may submit any number of titles (two copies of each). The deadline is 31 January 2012.

Submissions for the 2011 prize should be made to:
The London Hellenic Society, “Criticos Prize”
The Hellenic Centre, 16-18 Paddington Street, London W1U 5AS

Fereydoun Faryad is considered to be among the leading poets of the new generation in Iran, and his poems have been translated into English, French, Greek, and German. He was awarded the 2005 State Prize for Translation in Greece. In 2006, Greece's State Televison produced a 60 minute film about his life and works. His children's book, DREAMS OF KITES AND DOVES, was translated into Greek by Yannis Ritsos, with whom Faryad worked closely in the 1980s.

HEAVEN WITHOUT A PASSPORT (Red Dragonfly Press, 2006) was Faryad's first collection to appear in English, and was inspired by his residence in Greece. A sequence of 81 poems in a style that has been inﬂuenced by the work of Nazim Hikmet, Louis Aragon, Yannis Ritsos, as well as the classical Iranian poets. There is a gentleness and energetic hope in this work, a brightness like simple sunlight that triumphs over the black circumstances of poverty, exile, and war.

Reading will be in English and Persian and will included poems from a newly translated work entitled THE NAME OF THIS TREE.

The Reading is Thursday, June 9th at 7:30pm at Common Good Books

U SREDIŠTU VODE (In the Centre of Water), a volume of Selected Poems by Yiorgos Chouliaras, translated by Nikola Đuretić into Croatian, was launched in Zagreb on October 19, 2010. Poet, translator, and publisher Nikola Đuretić and critic and poet Branko Bošnjak introduced the volume, as well as the poetry series initiated by the book, at the premises of the Croatian Writers Association. Yiorgos Chouliaras, who read from his work at the event, had just participated in the Zagreb Literary Talks organized by the Croatian Writers Association.

U SREDIŠTU VODE includes In the Centre of Water and other poems by Yiorgos Chouliaras published in Greek – in his retrospective volume Roads of Ink and previous works – and translated and published extensively in English in leading periodicals, includingHarvard Review, Poetry, Ploughshares, and World Literature Today. His work is included in New European Poets and other international anthologies, while he is the author of numerous essays in English and Greek on literature and cultural history.

Born in Thessaloniki and educated at Anatolia College, Reed College, and The Graduate Faculty, New School for Social Research, Yiorgos Chouliaras has worked in New York as a university lecturer, advisor to cultural institutions, correspondent, and press officer. Presently departing from Dublin as Director of the Greek Embassy Press & Communication Office, he has also worked in Canada, Athens during the Olympics, Boston, and Washington, D.C.  A founding editor of the Greek reviews Tram and Hartis and an editor of literary and scholarly periodicals in the U.S., he was also Vice President for international relations of the Hellenic Authors’ Society.

Further information about the volume may be obtained by writing to the publisher (Naklada N.đuretić, B. Adzije 22/2, 10000 Zagreb, Croatia) or by contacting the translator (nikola.djuretic@zg.t-com.hr) or the author (yiorgos.chouliaras@gmail.com). Several poems by Yiorgos Chouliaras in English translation are easily accessible at a Swedish website on poetry & the Mediterranean at www.mediterranean.nu/?p=509.

" The title of the article comes from a Yiorgos Chouliaras poem, referring to a comment by noted Greek Latinist Stephanos Koumanoudes. Poems from Chouliaras are featured at Poeticanet and mediterranean.nu. Listen to Chouliaras read his