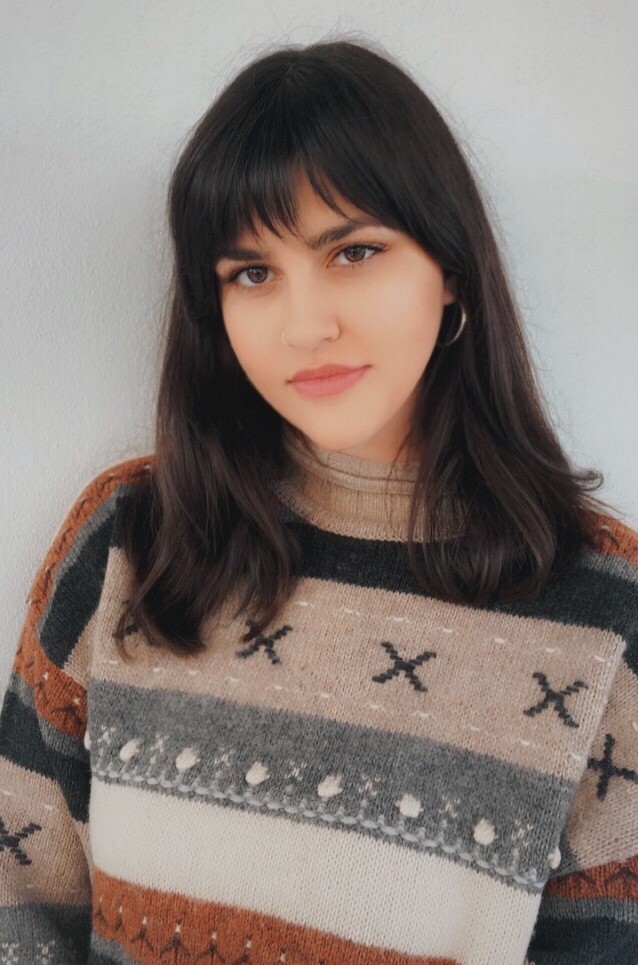 The multimodal poem “Ritual” was conceived as part of my attempt to delve deeper into the intricate relationship of writing and re-writing that is prevalent between Sappho’s and H.D.’s poetry, within the framework of the collaborative workshop between Aristotle University of Thessaloniki and Stockton University titled “H.D. and Sappho Revisited: Poiesis in Motion.” Having translated selected poems from their body of work from Greek into English and vice versa, I decided to use my English translations of Sappho and incorporate bits and pieces from both poets’ works in a different context to create a new story, the same way H.D. translated and built upon Sappho’s fragments, considering “these broken sentences and unfinished rhythms as rocks – perfect rock shelves and layers of rock between which flowers by some chance may grow” (58).

Moreover, a main idea, which was prevalent in the writings of both poets, that fuelled inspiration for my piece was the fact that within their work they created a space where suppressed, neglected, silenced, minimized and misconstrued female voices could retell their stories from their own perspective. Therefore, I chose to place at the core of my piece a female heroine; not a glamorized, stereotypical figure, but a realistic one. More specifically, the heroine in my poem was inspired by my grandmother, as the poem’s whole narrative is based on a common practice among Greek women of her generation, namely using a “spell” in order to exorcise the evil eye.1 The fact that there was great secrecy regarding the content of this spell and the condemnation of such practices by members of the local community as a form of witchcraft motivated me to re-imagine it as a healing poem and an ode to womanhood.

Additionally, I was inspired by the often-unexpected way Sappho and H.D. use natural imagery to create symbolism alluding to women. My goal was to subvert the stereotypical symbolic representation of the concept of femininity in my piece and bring forth its neglected nuances so as to view it through a different lens. Thus, I chose to amalgamate delicate and romantic images of nature, which are typically associated with women in poetry, with dark and bleak natural imagery, so as to create unexpected juxtapositions that capture a broader spectrum of femininity, which includes not only beauty, sensitivity and tenderness, but also mystery, darkness, complexity, rejuvenation, perseverance.

Furthermore, drawing inspiration from the importance of rhythm in both Sappho’s lyric poetry and H.D.’s imagist work, I chose to use a mostly consistent stanza pattern and rhyme scheme throughout the poem as well as a chorus that is repeated twice with variation in order to achieve the spell/song effect. However, the seemingly conventional form of the piece encloses a multiplicity of voices that create unexpected juxtapositions. The poem’s first stanza seems to be the only one where we directly hear the voice of the granddaughter sharing a childhood memory of her grandmother singing the spell and from the second stanza until the end of the poem, the voice of the grandmother seems to take over. Nevertheless, as the poem progresses it becomes apparent that this is not exactly the case, as the two voices often merge, bringing together incongruous elements which, combined with the fragments from Sappho’s and H.D.’s poetry included in the piece, create a collage of female polyvocality.

In addition, this interweaving of different voices is paralleled with the combination of different textures that the multimodality of the poem brings forth. The intertwining of words, image and sound in video form2 create a world that invites its audience to embark on an exploration of the self through a deeper understanding of our relationship with the past and with nature. The juxtapositions in the video, through the blending of natural images with indoor space, along with the mingling of the present state of my hometown, Trikala, with objects that belong to my grandmother and were passed on from one generation to the other, cohere with the juxtapositions prevailing in the poem itself, within which coexist elements of hurt and joy, heartbreak and healing, death and re-birth.

Finally, creating this project was not an easy journey, as multiple challenges emerged along the way. Most importantly, my total inexperience of video and sound recording and editing made me initially believe that I would be unable to complete this endeavor without external help. However, the deeper I delved into this piece the more I was inspired to complete my vision of it by myself, no matter how amateur-looking the outcome would be, because, after all, this project became a medium of sharing very personal experiences and emotions and incorporating in it my first attempt at filming and editing makes it even more special to me. Ultimately, the journey of creating this piece became so much more than I initially thought, as it evolved from an effort to achieve a deeper understanding of the relationship between Sappho’s and H.D.’s work to a trajectory of self-discovery, substantiating my profound appreciation for the two poets’ work, through the process of writing and re-writing, creation and re-creation.

1 In Greek tradition, the evil eye or “mati” was considered to be responsible for feelings of sickness, dizziness or uneasiness as a result of the transmission of negative energy from one person to another due to gossip or jealousy and typically some women in each neighborhood knew techniques and a “spell” that could exorcise it.

2 All images and clips included in my video constitute original content I created.