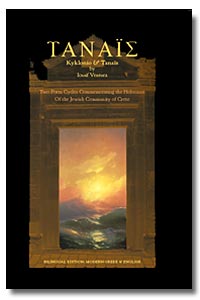 by Iossif Ventura
Just over 70 years ago, on June 9, 1944, the German merchant vessel Tanaïs was torpedoed by a British submarine off the coast of the Greek Island of Crete. The freighter was carrying 900 prisoners of war destined for the slave camps and crematoria of mainland Europe. All prisoners perished in the attack-among them, 299 Jews (men, women and children) comprising virtually the entire Jewish Community of Crete.

Among the handful of Jews who evaded capture was the family of a small child named Iossif Ventura. Iossif survived to become a nationally renowned poet. Red Heifer Press is very honored to present the English-speaking world with the first bilingual edition of Tanaïs & Kyklonio, in which the original Modern Greek is accompanied by a powerful English translation that is the collaborative effort of several distinguished poets, scholars and critics.

Iossif Ventura lives the echoing void left by friends, playmates, cousins, uncles and aunts, in a small town haunted by his uprooted Jewish Heritage. These poems stand out among all the poetry of the Holocaust for their eloquent tone, tempered grief, and surrealistic imagery. They are beautifully moving poems, a worthy memorial to the small but ancient Community that for at least 2300 years played an integral role in the economic and cultural life of the Island-a Community that was wiped out in one fatal hour that must never be forgotten. "Transcendent revelation traverses the poetry of Iossif Ventura, a feeling of everyday sacredness, the sacredness of life, transcendent revelation. This sense of the sacre of the historical moment extends throughout Ventura's poetry, giving it a certain rhythm, a musical movement interwoven with biblical rhetoric not that far from the solemn dithyrambs of [legendary Greek poet] Andreas Kalvos."
-Alexis Ziras, Founding Member and past Vice-Chairman and President of the Hellenic Authors Society.